Surname. Of English and Welsh origins, meaning John’s son. It remains the most popular surname in Wales. In 1909, O.S. Jones built the historic Jones Seed Co. building, now the north wing of Jones421, to house his seed company.

Idiom. Keeping up with the Joneses

-In New York (1892) the much-envied society elite known as “The Four Hundred’ included many Joneses and their relations. “Keeping up with the Joneses,” refers to the comparison of ones neighbor as a benchmark for achievement. “At the Jones, you have arrived.”

v. Craves “They Jones the Jones.”

Jones Seed Co. strives to nurture and grow a new generation of purveyors of food, drink and merch who value the synergy born of diversity.

Jones is planting a seed of community in Uptown.

Jones Seed Co. is a company (community) of energetic entrepreneurs working together to create an exciting and rewarding customer experience, rich in local goodness.

We treasure your company. 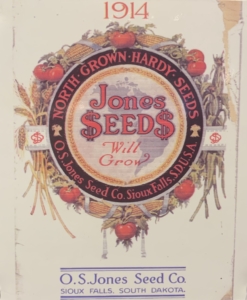 Placed on the National Register of Historic Places as a contributing structure in the Old Courthouse and Warehouse Historic District, this unique building was constructed in 1909 for the O.S. Jones Seed Co., a distributor of farm and garden seeds.

During most of the 1940s and 1950s, Crescent Electric Supply occupied the building, before it housed several different automobile parts dealers in the 1960s. Lindsay Bros. Co., a farm equipment distributor, then used the building for storage until the Food Pantry took it over in the 80s.

The building contained twelve concrete bins with a capacity of 30,000 bushels of seed. The rear quarter of the structure has a gable-roofed cupola that rises to a height of 70’and contains an elevator head house that was used to fill the grain bins. Vestiges of the grain bin dryers can still be seen near the ground on both sidewalls. The rear (east) wall of the structure has the remnants of a door for loading railroad cars.