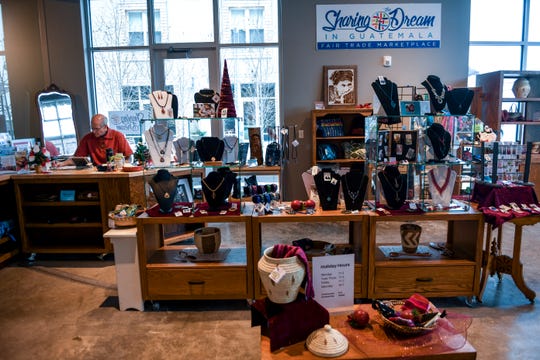 When Vermillion native Diane Nesselhuf adopted two children from Guatemala more than two decades ago, she was disturbed by the stories of the other children in their orphanage.

“Many of the children were there because their parents couldn’t afford them,” Nesselhuf said. “It bothered me.”

So much so that Nesselhuf traveled to Guatemala and spent a month talking with different groups, asking how she could help. The answer was clear: Buy their homemade products, and women would be able to keep their children.

In 1996, Nesselhuf started Sharing the Dream in Guatemala, a nonprofit organization that works to reduce poverty in Guatemala by partnering with local artisans and other small businesses.

With a lot of political friction around immigrants from Central American countries coming to the U.S., Nesselhuf said she has found that many of the people she works with don’t want to leave their home country, but they feel they have no other choice. With few jobs in their small villages, many have no way of earning a living.

One way Sharing the Dream helps with that goal is by training workers, many of them women, to create handcrafted products like jewelry and clothing, using traditional Maya techniques. It also offers scholarships for students, funds a medical center and has built a center that feeds and clothes elderly people.

“We have a lot of elders who would be begging on the street if we didn’t work with them,” Nesselhuf said.

Craig Spencer, a biology professor at Augustana University, first became involved with Sharing the Dream a few years ago after leading student trips to Guatemala for 15 years to study tropical forests. On one of his 40-mile treks through the forest, Spencer learned about bejuco de agua, a type of vine that bears a natural cross shape in its center, earning it the name the Maya Cross.

Augustana biology professor Craig Spencer holds part of the “bejuco de agua” plant on Monday, Dec. 16, 2019 at 421 N. Phillips Ave. in Sioux Falls. Through the Guatemala Maya Cross Project the plant is harvested in order to create handmade items. The proceeds from the sales are given to the artisans in Guatemala in an effort to reduce the rate of poverty. (Photo: Abigail Dollins / Argus Leader)

“The first time I saw that, I thought, ‘That is just amazing,” Spencer said.

He began to think of things he could do with the Maya Cross. He found that many of the people in northern Guatemala already make necklaces and other items out of the vine, smoothing it using a nail. He began bringing tools like sanders and saws to create jewelry, Christmas ornaments and keychains out of the vines.

Spencer tried to sell the items himself, but, as he says, “I’m a biologist, that’s not really my forte.”

“It doesn’t take long for two people living in South Dakota that are working in Guatemala to make a connection,” Spencer said.

Today, Spencer volunteers at Sharing the Dream’s store in the Jones421 building at 421 N. Phillips Ave. in downtown Sioux Falls. Passionate about the natural world, he is especially proud that part of the profits from the Maya Cross go to Bio-Itza, an organization that helps preserve the tropical forests where bejuco de agua grows.

“Tropical forests around the world, including in Guatemala, are being decimated right now,” Spencer said. “(People are) coming, and they’re clearing the forest to grow corn for their own needs. The sad thing is that the tropical soils are so thin and so nutrient-poor that the corn only grows for about three years and then it dies, it doesn’t produce anymore. So, then what? They move on and clear another patch.”

Spencer’s passion for his work is evident as he shows off pictures of people in the village of San Jose, where he volunteers. He is especially proud that many of the students he has brought to Guatemala later returned to volunteer on their own with the people whom he now considers friends.