Intoxibakes Is Open For Business 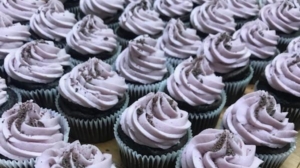 SIOUX FALLS, SD-  At Intoxibakes in downtown Sioux Falls, there’s a little something extra in these cupcakes.

“Here we have a variety of selections of alcohol infused into different baked good,” says Co-Owner of Intoxibakes Shannon Gilbertson.

Bakers mix different types of alcohol like rum and wine to add extra flavor to the pastries.  Most of the alcohol will “bake out” so you wont feel the same alcoholic effects that you would in a drink.   This means anyone can eat them.  The store also offer less “boozy” options.

Gilbertson explains,  “We thought maybe we should be a little bit more family friendly. So we actually have a sister business called Grandma’s Pantry, where we do all of our non-alcoholic baking out of.”

Intoxibakes began as an online business, then started selling out of the 1948 Trading Company in Brandon.  But opening their own shop came with some hurdles to jump over first.  The business was forced to close in early 2018, due to a state law that banned alcohol in baked goods.  But business owners Holly Jorgenson, Josie Layton, and Shannon Gilbertson were able to work with lawmakers to pass new legislation and save their business.

“Now that we have an actual place, we can come in to everyday. We’re not renting a kitchen from someone else,” says Gilbertson.  We can do whatever we want and it’s just our space. it’s just fun and it’s been super exciting for all of us.”

Intoxibakes is now one of two bakeries in Sioux Falls that infuses alcohol into their treats.   Before the law passed, alcohol was banned to be use in any sugary foods like cupcakes in the state.  Intoxibakes is located in the Jones Building on Philips Avenue.