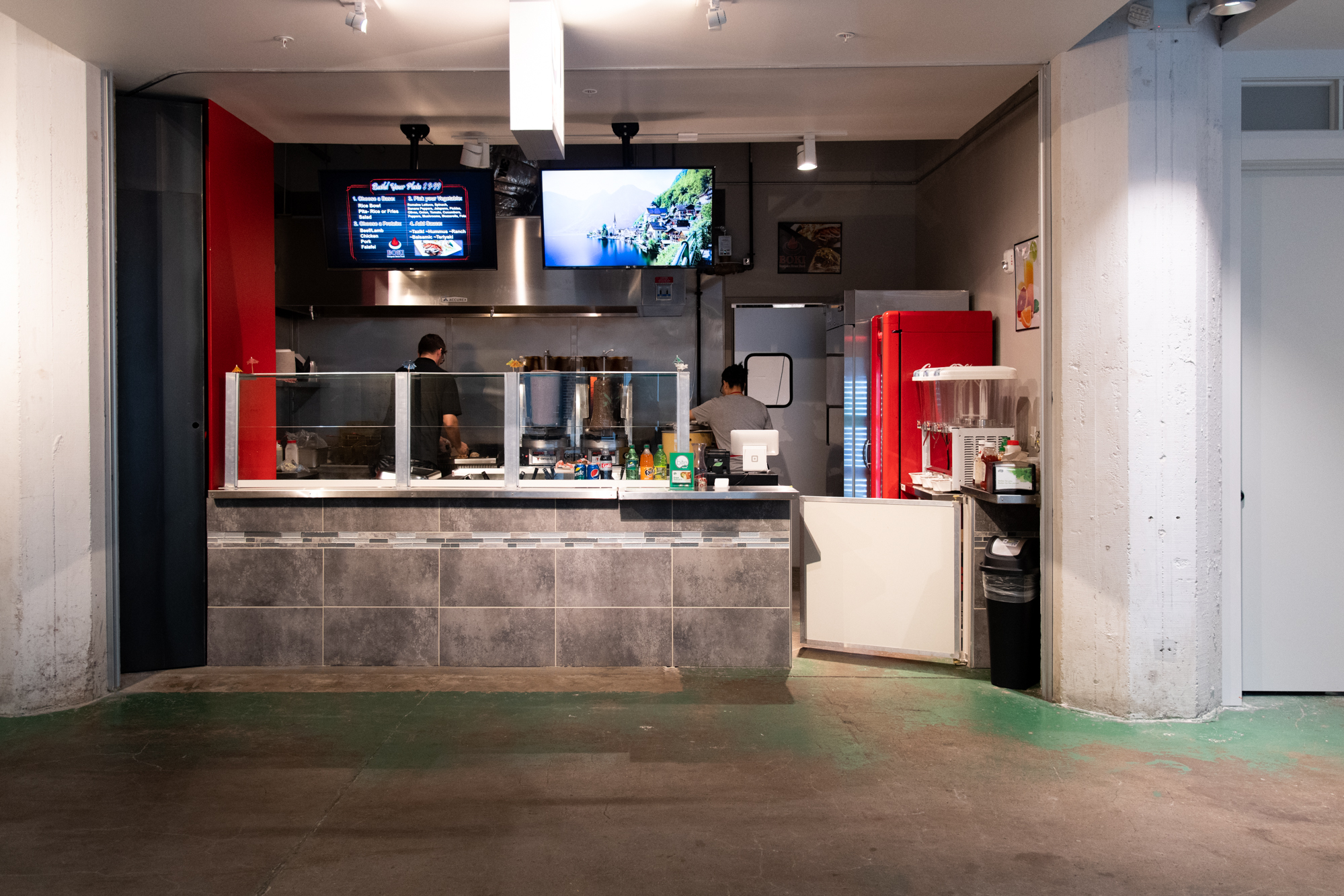 Already blessed with Swamp Daddy’s Cajun Kitchen, the Jones 421 building in downtown Sioux Falls has continued to grow with more food options that also started as a food truck. This one brings Europe to the Midwest. Walking into the open marketplace, Boki Gelato & European Street Food is split up into two storefronts. The first is the former Boki Gelato Italian Artisan Ice Cream from the Empire Mall.

Let’s cut to the chase… I’m a huge fan of themes and theme music. My perfect world is a fake town or village in theme parks with music blaring from the tall and/or hidden speakers (speakers hidden as rocks are my absolute favorite). As soon as we entered, we heard European music that took us directly to a different place far from South Dakota. Mission accomplished. “This is like frickin’ Disney World,” I said with (too much) joy to 605 multimedia designer Yany Avelar.

Not much further down is the Boki European Street Food storefront, which is where our journey truly began. We met owner Borjan Jaksic, who walked us through the “fast-casual” format. Known for gyros, Jaksic had us choose the base, and we took his recommendation of pitas. Next was the protein, and we chose beef for our first meal. For toppings, we had romaine lettuce, olives, tomatoes, and feta.

“You must have Taziki for your sauce,” said Jaksic.

Well, if we must.

I’m embarrassed to admit that I had to Google quite a few things, including taziki sauce. The Google machine told me that it’s “found in southeast Europe and the Middle East, is made of salted, strained yogurt, and is mixed with cucumbers, garlic, salt, olive oil, and herbs.

The sauces are made from scratch, and we were happy with our choice to go with the professional advice.

We both had the same reaction when we took a few bites. There was so much meat. Because of that, the toppings were falling out (not recommended for a first date, unless you want them to watch as you eat graphically). Toppings or not, though, it was fresh and savory. Yany mentioned it wasn’t too salty, which can sometimes happen at fast food-type establishments.

Jaksic went a little HAM on the feta, and it was amazing. The more feta… the betta.

Fries came on the side, and they were wide and thin, almost like steak fries. They were salted to perfection, and it was hard to keep my eye on the prize as I kept eating the side more than the main dish. Two lemonades were brought over. One was Traditional and one was Strawberry. Yany’s favorite was the strawberry.

I took a sip and asked, “Does it taste like a shot to you?” Next was the vegetarian option – the Falafel. I acted like I knew what it was, and apparently so did Yany, because when I started to write this I also had to Google it.

“Yeah I didn’t know either,” she admitted.

The dish, which was served on rice (Spanish rice?), is a deep-fried ball made from ground chickpeas. I took a fork full of rice and grabbed a piece of falafel. It had a little spice to it, and I dug in for more rice. Soon I realized I was still eating rice and was zoning out.

I was back from my rice coma and took an individual bite of the falafel. It was kind of dry, but good. It’s better with rice, in my opinion. All of the food was rich and was very filling. By the time we got to the chicken gyro, we were groaning about eating more (I know, poor us).

Mind you, we had taken photos of each dish, tried the others, and then we got to the chicken, which had a lot of red peppers on it. It was pretty soggy at this point, so we just ditched the pita and used utensils.

Also, I’m not a huge red pepper fan, so I just went in for the chicken. It was grilled to perfection, and I wish I had more room in my belly for it. We then waddled over to the gelato area where the charming music was still in full force. Because of our state, and so we could be super selfish, we sampled all of the gelato. Some of our favorites were Vanilla Bean, Nutella, and Tiramisu. The fruit flavors are made with real fruit, and you can order a fancy Gelato Fruit Cup (picture), which they’re known for. Get a little naughty with it with a house-made waffle or cone.

For the finale, our minds were blown when he made us an Affogato. This beautiful dessert is an Italian coffee-based treat. It’s typically served with a scoop of vanilla gelato or ice cream and “drowned” with a shot of hot espresso. We chose Chocolate Chip for our gelato, and it legit gave me goosebumps and was a nice warm-up on a cold Friday.

Boki is a great addition to downtown and the Jones 421 building. I would go back just for the gelato or to try their other European desserts (see side bar). The open concept is neat as well. Definitely worth a stop or five. It’s definitely more casual, but the open mall concept is nice, especially when you can watch Bella Rosa Flower Market build arrangements as you eat across the way. We even saw someone buying fresh flowers for his mother’s birthday. It was adorable. The gelato storefront was my favorite, as they were the ones blaring the themed music (not to mention the sweet smells were to die for).

I will be back, like, tomorrow to get more gelato. Plus I’ve already told a bunch of my espresso-loving friends to get there ASAP for the Affogato. It’s hard to find desserts like this close by. Also, I’ll try the gyros again, especially for that feta. So much betta with feta. (Okay, I couldn’t help myself.)

Eye On KELOLAND: Sharing The Dream
Scroll to top