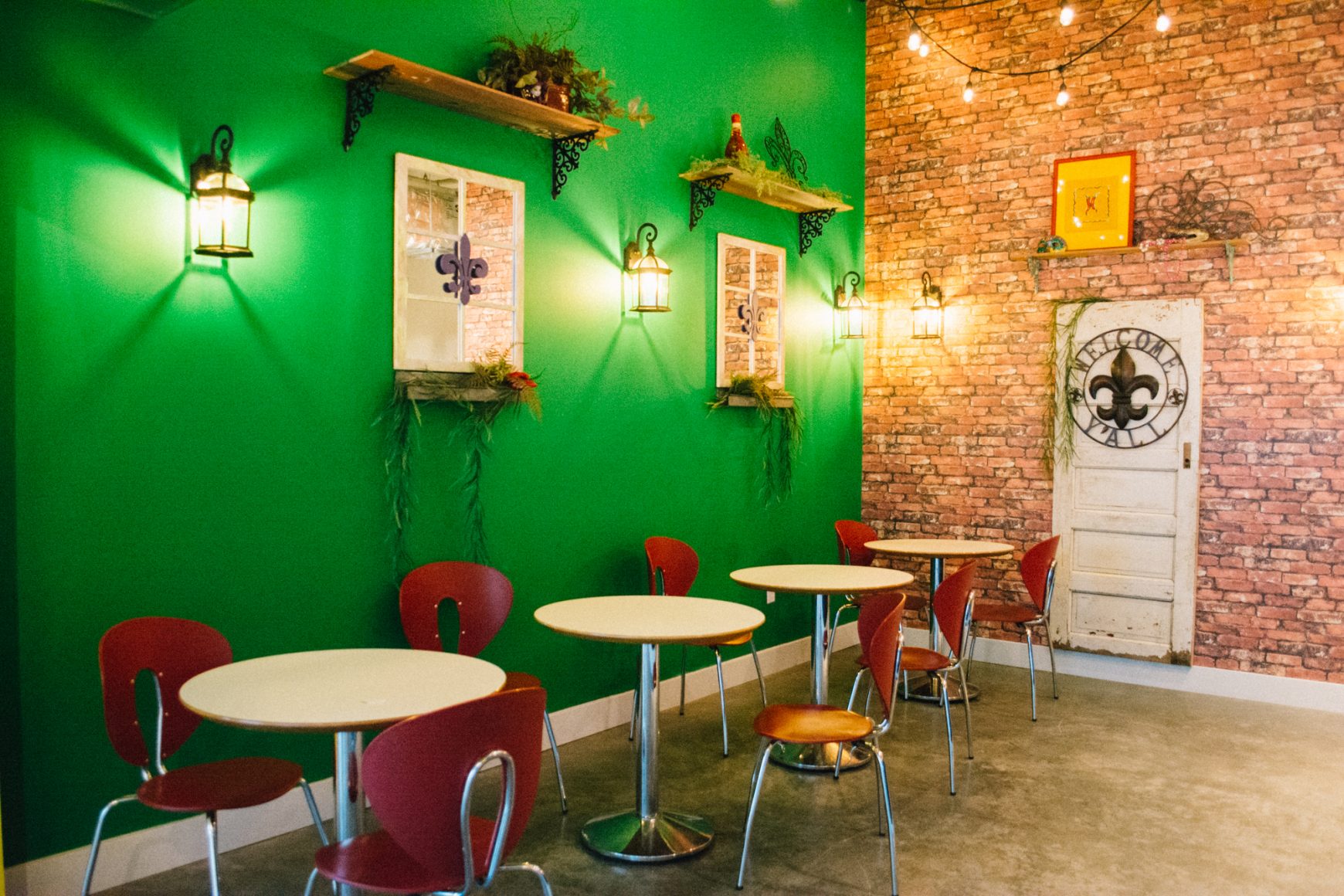 Walking into Swamp Daddy’s Cajun Kitchen, chances are you’ll be greeted by Del’Inkka Beaudion, who wants to give her customers the taste and feel of Louisiana. Swamp Daddy’s began as a food truck Beaudion started with her mother-in-law, Gwendolyn,  three years ago. It soon became a popular eatery at festivals and events in Sioux Falls and caught the attention of the Jones421, a newly renovated apartment living and marketplace building downtown.

Shortly after seeing the space that could be home to a future restaurant, “all of the cards just fell into place,” she said.

Swamp Daddy’s opened at the beginning of January starting off with a lunch menu including items like Jambalaya, Catfish Po’boy Sandwiches, Hush Puppies, and Bread Pudding. The restaurant is decorated with a Louisiana courtyard in mind, from the lanterns and string lights on the walls to the fleur-de-lis symbols. But it’s not a typical restaurant space. There are only three tables inside Swamp Daddy’s, although it connects to a commonspace that’s shared by The Source Coffee Roastery + Taproom and Game Chest, allowing visitors to easily move between the three businesses.

“This space allows us to do everything I’ve dreamed of and always wanted to do, even though it’s not a traditional restaurant, stand-alone building type of space,” said  Beaudion. “I still have the capability for people to come in and sit down and eat or take it to go.” Another feature she loves is the open concept kitchen that allows her to visit with customers and take orders, all while cooking and serving up food just behind the counter, which “makes it a lot of fun.”

Even before the food truck endeavor, Beaudion and her mother-in-law have been serving Cajun food for years, starting off with crock pots full of jambalaya at different events. That same customer base has stuck with them, growing alongside Swamp Daddy’s as Beaudion’s restaurant dream took shape. “Especially when our customers say how proud they are of us from being able to go from the crock pot to the restaurant … it’s just amazing how truly blessed we are.”

Starting this month, Swamp Daddy’s is expanding to include a dinner menu with longer hours running Tuesday through Saturday. Beaudion says at some point, she’ll include alligator as a special, which made its appearance on the food truck menu and quickly sold out.

In many of her dishes, like the Shrimp and Chicken Jambalaya, she uses a combination that she calls the ‘trinity,’ which is made up of bell peppers, celery, and onions. Her other seasonings include garlic, chili powder, and black pepper.

“These are all normal pantry items, but it’s how you use them to season something that makes all the difference,” she said.

There’s plenty of possibilities that a restaurant location gives Swamp Daddy’s (Mardi Gras party, anyone?), but the process of reaching that point, Beaudion says, has been humbling. “It’s been baby steps, and I’m excited to see what the future holds,” she said. “I’m living in the moment and embracing our restaurant in this location. It’s a lot of fun.”

Follow Swamp Daddy’s on Facebook to see their weekly specials, events, and latest menu items, or stop by for lunch or dinner at their 421 North Phillips Ave. location.

Beaudion’s passion for sharing the Cajun flavors of her home state all started with two things: a recipe and the dream of opening up a restaurant someday. Now, “I want to be able to inspire people,” she said. “Whether or not it’s in the restaurant industry, I want people to know that you can follow your dreams, but it takes baby steps to get there.”

ONE OF THEIR MOST POPULAR ITEMS?

“People tell us all the time we need to bottle that stuff,” said Beaudion. It is one of a few things she always mixes up herself, to make sure the flavor is always consistent.

Get the Louisiana platter for a taste of some classic Cajun dishes that includes jambalaya, crawfish, and hushpuppies all for $15.

CAJUN IN THE FAMILY

Del’Inkka’s first taste of running a Cajun food restaurant was in her hometown of Alexandria, Louisiana. Her mother-in-law, Gwendolyn, started a restaurant called Louisiana Gumbo To Go in the fellowship hall of their church serving up jambalaya and gumbo.