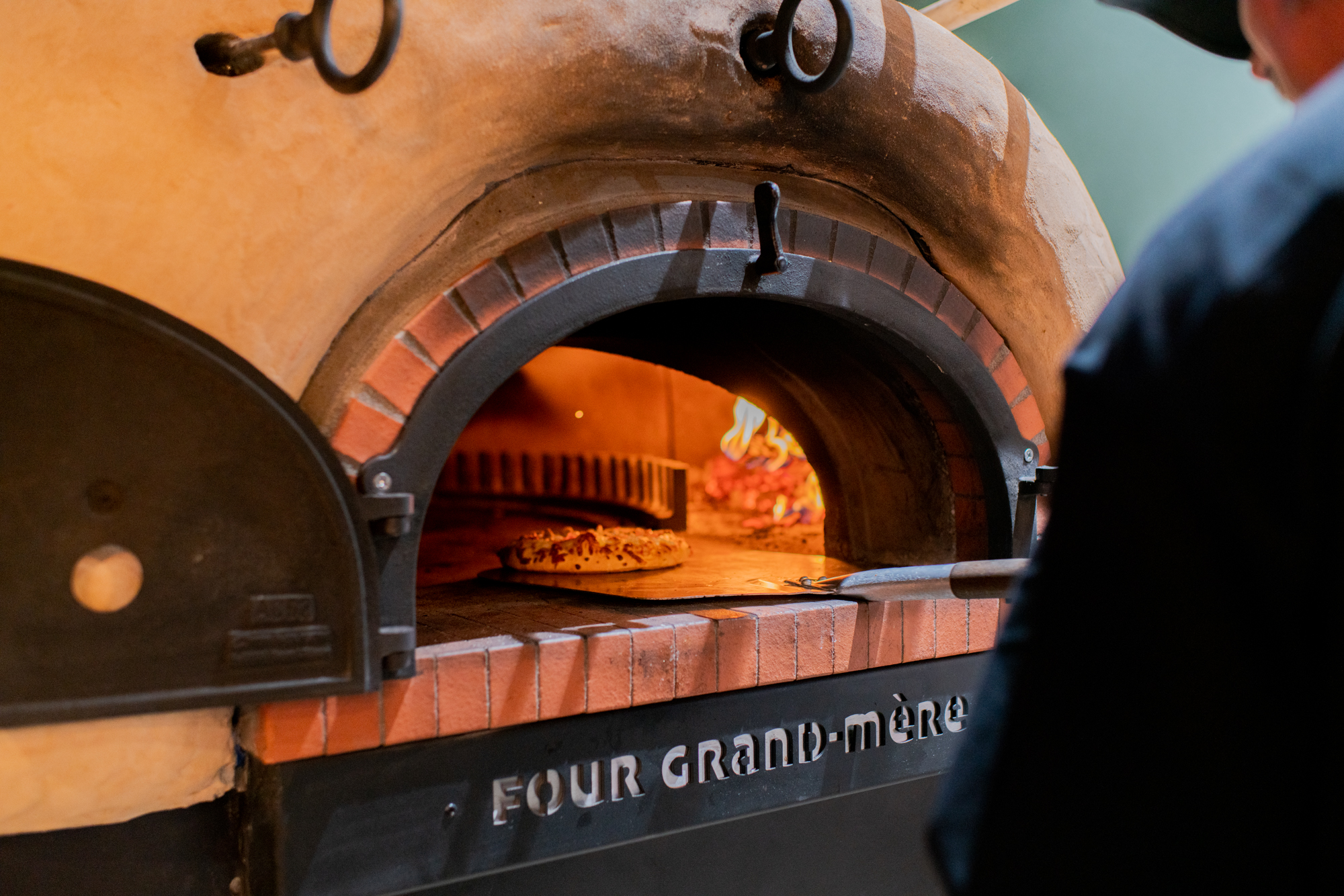 What started as a food truck and on-site catering company in 2016 is now a brick and mortar in the Jones421 building on Phillips Avenue in downtown Sioux Falls. Papa Woody’s Wood Fired Pizza is joining the likes of Boki European Street Food and Swamp Daddy’s Cajun Kitchen in the open marketplace concept.Not only is this great news in general, but it’s within walking distance of 605’s office.

Owner Lisa Esser greeted us at the counter and had a smorgasbord cooking away in the oven and on the fryer. 605’s John Snyder (and my husband) joined me to help me feast. As we waited, it was fun to wander around Jones421. I was looking at baby clothes across the way when I noticed Papa Woody’s incredible signage that included a wall of wooden logs. Genius.

Our food started coming out, and we grabbed all of our plates and took them to the open seating area in the hallway. It was a nice day out, and some people were enjoying their food outside in the courtyard, where there is also a space dedicated for bocce ball.

Since I’m nine months pregnant in the middle of the summer, it was nice to pretend to be in the outdoors as I had lunch in the air conditioning. My eyes fixed right on the Mozzarella Sticks. They were thick and short, and weren’t the greasy bar-type of mozzarella sticks. I almost thought they seemed baked, so I did more investigating and ate three more.

Consuming almost the entire basket before John got to them, I didn’t really have more information, but I was satisfied.

Next we tried the Fried Pickles. This is more John’s wheelhouse, as fried pickles always make me nervous. They’re sometimes soggy, but I had higher hopes as these were pickle spears and not slices. Those get mushy real quick. John took a bite and said, “It’s a really good balance between the breading and the pickle. I would crush these.”

He was correct. They were crunchy and very easy to bite into.

For our third appetizer (holy cow), we had the Wood Fired Italian Nacho. This included homemade fried wonton chips smothered with mozzarella, pepperoni, black olives, banana peppers, drizzled with pizza sauce and baked by the fire.

The wonton chips were light and not soggy, which was shocking since we waited so long to eat them. Everything tasted fresh, and I didn’t get flustered by the toppings, even though there were a lot. At this point, it was insane that we still had more. We nibbled on the Chicken Wings, which can come with sauces like BBQ, Sweet Chili, Buffalo, Parmesan Garlic, and are served with carrots and celery.

We got the sweet chili wings, which were tangy and were, in fact, sweet. “I wouldn’t eat them on a date, but then again I wouldn’t ever eat wings on a date,” said John about dating to his wife. Moving on.

It’s hard to even touch on all of the pizza we had because they were individually all delicious, but the unique offerings stood out more than, let’s say, the 12-inch Pepperoni.

There are two choices for crust – thin and crispy or thick and doughy. You can get the 12-inch, or go more personally sized with the 7-inch.

My favorite is thin, and John loves thick, so this was a win to try both. Our thin pizzas included Greek and Chicken Bacon Ranch.

The Greek was beautiful to look at and even better to taste. It had olive oil, mozzarella, spinach, artichokes, tomatoes, black olives, feta cheese, and a balsamic drizzle. When it says tomatoes, it’s fresh tomatoes. Like right from the Farmers’ market type situation. And the balsamic glaze made the whole pizza.

We discussed how, though it’s thin crust, it’s not the kind where you don’t know where to grab the pizza and it actually adds to the taste and isn’t just a crunchy bottom that holds the toppings.

This is definitely a hit for bacon lovers, and this whole place is good for ranch lovers, because ranch is on a lot of options and can be use as a sauce with pretty much everything.

Next were the thick and doughy options, which were the Buffapeño and the Meatlovers. Meatlovers was the standard pepperoni, sausage, and Canadian bacon. It was very good, but I was looking forward to trying the Buffapeño. This had cream cheese, mozzarella, buffalo chicken, jalapeño, pineapple, bacon, banana peppers, cheddar, blue cheese crumbles, and a ranch drizzle.

It was kind of crazy how many flavors and ingredients the Buffapeño had. For only $10, I almost felt like I was stealing. John had actually forgotten we were doing the review and had eaten this pizza the day before and wouldn’t stop raving about it.

And after trying it, I get it. This is another quick and unique option for dining at the Jones421 building. I’m looking forward to trying more items and eating (many) more mozzarella sticks. There are also other unique pizza options to explore, like the Morning Woody with country gravy, mozzarella cheese, egg, bacon, and cheddar. What?!

The Jones421 building is a great idea for so many reasons. In 2019, everyone wants a unique experience and quality, but they want it fast. Need to pretend that you remembered someone’s birthday? Grab a gorgeous bouquet at Bella Rosa. Want European gelato? Stop by Boki. And now, take home quality, wood-fired pizza at Papa Woody’s. Bonus? They also have solid merchandise and signs that joke about wearing bigger pants (but really, it helps with the eating experience).

Papa Woody’s pizzas range from $10 – $15, which is so cheap for the quality. Nothing is above $20, but your tab will add up once you order all of the appetizers, because you should.

With pizzas like the Greek and Buffapeño, you can experiment or go with traditional, like Pepperoni. Everything is fresh out of the oven, but options from the fryer are quality as well. Everything came out crunchy and fresh, and I heard amazing things about the Chicken Tender with Fries.