The History Of Jones Seed Co.

Orville S. Jones was born in Coshocton, Ohio, in 1866 to Thomas and Rebecca Jones. Thomas was a veteran of the Civil War.

In 1868, when Orville was just 2, the Joneses moved from Ohio to Muscatine County, Iowa, southeast of Iowa City. Orville attended public schools there, and when he was old enough, he helped his father with farm work.

In 1878, when he was just 41, Thomas died, leaving behind Orville, his mother and a sister and brother. In 1883, the Jones family moved to Brule County in Dakota Territory, where Orville continued in the field of agriculture. He moved to Madison in 1888 and opened a flour and seed business, which he ran for five years before returning to farming.

In 1906, he opened a new company in Madison: the O.S. Jones Seed Co. Jones visited Sioux Falls often and eventually was wooed by the Commercial Club to transfer his operation here. The new Jones building would be constructed between Andrew Kuehn’s warehouse and that of the Jewett Brothers. Around the corner, the John Deere Plow Co.’s new building would round out a full block of industrial progress for Sioux Falls. The Jones Seed Co. was the last piece of the puzzle. The city was looking to grow beyond the small-town image it had. The Argus Leader reported “When the Jones Seed Company’s building is built, the wholesale section of the city will look more like that of St. Paul than of a South Dakota city.”

The new building at 417 N. Phillips Ave. would have a 44-foot-wide front, with 142-foot depth. The height would be three stories tall, not including the basement. The $35,000 project would be of fireproof construction and would combine the best features of several similar businesses Jones had visited in his travels. The elevator at the rear of the building would be two stories higher than the main building and would be made from concrete as well. It was advertised that this construction would make it rat- and mouse-proof. The rear of the building would have access to a Milwaukee side track, train tracks that also served the other warehouses in the area.

Work was scheduled to begin in early June 1909 and was to be completed by November.
The impact expected from the O.S. Jones Seed Co. was no small matter. It was expected to employ 65 to 70 people on a year-round basis. Between $3,500 and $5,000 was expected to be spent at local printers for seed catalogs, while multiple local farms would be employed to grow crops for seed purposes. Jones planned an experimental station nearby for the growing of crops not to be trusted to the average horticulturalist. He also had plans for a greenhouse larger than all other greenhouses in the state combined. The impact on jobs in the city would be substantial.

In 1914, Jones established a monthly magazine called the National Alfalfa Journal. Within two months, 10,000 subscribers had signed on. Its success was such that, before long, local printers couldn’t handle the production. They moved printing to Chicago, and eventually the magazine moved to Minneapolis and was sold.

In 1917, Orville married Anna May Honey, formerly of Aberdeen. After college, she was employed as a stenographer at Jones Seed Co. before marrying the boss.

In late 1918, it was announced that the Jones Seed Co. would be sold to the Northwestern Seed Co. Orville returned to farming but kept an office in Sioux Falls for a while. He and Anna moved near Brookings, where he farmed and they raised seven children. Orville died in April 1945.

The Jones Seed Co. building remains a fixture in downtown Sioux Falls. It has housed many businesses since its construction, including Crescent Electrical Supply, L. A. Auto Supply and, more recently, the Food Pantry. It recently has been converted to lofts and retail space, now known as Jones421, as downtown Sioux Falls continues to thrive.

Eric Renshaw of Sioux Falls has written the book “Forgotten Sioux Falls” and gives a historical perspective on his website GreetingsFromSiouxFalls.com. 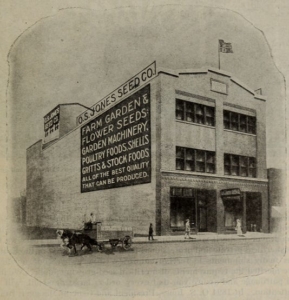 Keeping Up With The Jones’s

First Of Its Kind In Sioux Falls
Scroll to top